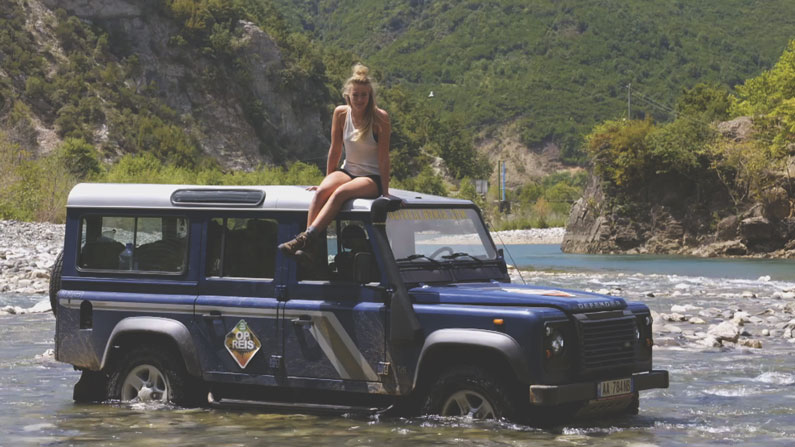 Back in summer we put together a three-week road trip from Sarajevo to Tirana for the Dutch TV show 3 Op Reis, and its glamorous presenter Geraldine Kemper. Their route took them through Bosnia, Montenegro, Kosovo and (after what seemed like an age, Albania – or Albanië to our Dutch friends). Geraldine and the crew had only two full days to spend in Albania, so their first plan of driving from Prizren to the Riviera via the Lake Koman ferry, then getting back to Tirana for their morning flight, was a non-starter (it takes a long time to get around Albania…).

Instead of heading to the southern beaches, we proposed they end the tour on our favourite beach in the north, at Cape Rodonit. From here it’s an easy one-hour drive to Tirana’s Rinas airport so there’d be no stress about catching the flight back to Amsterdam. The only question was, what to do with them in-between?

Producer Daan Kuipers of 3 Op Reis wanted to include the city of Shkodër (lots of bikes, he is Dutch after all) and a mountain experience. He originally fancied the village of Valbona, which we steered him away from as a) since the asphalt road was completed it’s become horribly busy and b) the valley is being destroyed by insane hydropower schemes. Not a very uplifting story, and not a side of Albania we wanted to present to 3 Op Reis’s viewers. Instead we sweet-talked him into visiting one of our favourite villages in Mati district, where a lovely couple, the Pashas, still live in the siege tower built by their family for protection 250 years ago during a nasty blood feud.

The road to the Pashas is a bit spicy, but thankfully Geraldine acquitted herself well behind the wheel of the Land Rover Defender we provided (under the careful eye of our very own Ardi Zhugjeli). No wonder when she arrived at the Pashas, she enjoyed the raki so much…

We took Geraldine and 3 Op Reis through one of our favourite (and most hard-to-reach) mountain regions, Mati, to meet a family who live in a 250-year-old stone kulla siege tower
Watch The Trailer

Keep up to date with our news from Albania

We hope that worked!